Minister of Finance and Economy 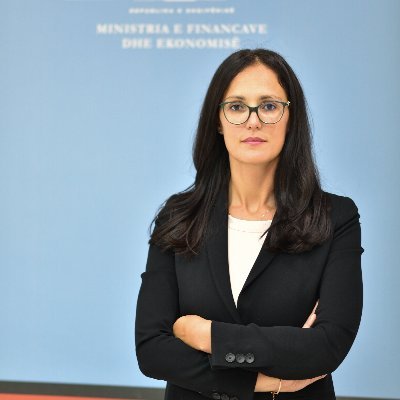 She studied in Italy at Luigi Bocconi University, graduating with a Bachelor’s Degree in International Economics and Management and an MSc Degree in General Management. In November 2012, she earned the title of Doctor (PhD) in Banking and Finance from the University of Rome, Tor Vergata, Italy.

Ms Ibrahimaj has a long work experience. From 2019 – 2021, she served as General Director of the  General Tax Directorate; from 2016-2019, she served as the General Director of the Albanian Institute of Statistics (INSTAT); meanwhile, during 2015-2016, she worked as a coordinator for financial and economic affairs at the Prime Minister’s Office. From 2011-2015 she worked as an economist at the Bank of Albania and as a board member, senior financial officer at Tirana Express. From 2007-2010, she performed the duty of general manager in Urban Distribution, and from 2005-2007 she worked as a manager in the Albanian Distribution Association.

She is fluent in English, Italian and French.